Cranfield University is a British postgraduate and research-based public university specialising in science, engineering, technology and management. Cranfield was founded as the College of Aeronautics in 1946. Through the 1950s and 1960s, the development of many aspects of aircraft research and design led to considerable growth and diversification into other areas such as manufacturing and management. In 1967, the Cranfield School of Management was founded. In 1969, the College of Aeronautics became The Cranfield Institute of Technology incorporated by Royal Charter and gained degree awarding powers and became a university in its own right. In 1993, it adopted its current name. 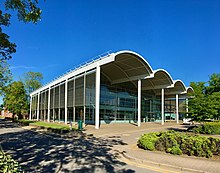 Cranfield campus is approximately 50 miles (80 km) north of central London and adjacent to the village of Cranfield,Bedfordshire. The nearest large towns are Milton Keynes and Bedford, the centres of which are both about 8 miles (13 km) away. Cambridge is about 30 miles (48 km) east.

Shrivenham is about 73 miles (117 km) west of London, adjacent to Shrivenham village, 7 miles (11 km) from the centre of the nearest town, Swindon, and around 23 miles (37 km) from Oxford. The Cranfield campus sits within the Cambridge – Milton Keynes – Oxford corridor where there are plans to link these cities and stimulate economic growth.There are also plans for a tram system between Milton Keynes and Cranfield University, although this is still at an early planning stage.

There are a number of companies located on the Cranfield University Technology Park ranging from large international companies to small start-ups. Major companies on the park include:

The Nissan Technical Centre Europe, which designs and develops cars for the European market. The NTC Europe facility occupies 19,700 square metres (0.0076 square miles) of the Technology Park, representing an investment of £46m by Nissan. Innovation Centre: the Technology Park is also the location for a large number of smaller companies.

Cranfield University is the academic partner in project with Milton Keynes Council to establish an undergraduate campus, code-named MK:U, in nearby Milton Keynes.The plan anticipates opening by 2023, with a campus in Central Milton Keynes. In January 2019, the Council and its partner, Cranfield University, an international competition to design a new campus near the Central railway station. In May 2019, Santander Bank announced a 'seed funding' grant of £30M to help with building and initial running costs.