The main campus of the university is located in Dundee's West End which contains many of the university's teaching and research facilities; the Duncan of Jordanstone College of Art and Design, Dundee Law School and the Dundee Dental Hospital and School. The university has additional facilities at Ninewells Hospital, containing its school of medicine; Perth Royal Infirmary, which houses a clinical research centre; and in Kirkcaldy, Fife, containing part of its school of nursing and health sciences. The annual income of the institution for 2017–18 was £246.2 million of which £74 million was from research grants and contracts, with an expenditure of £255.2 million. 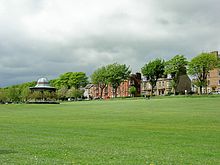 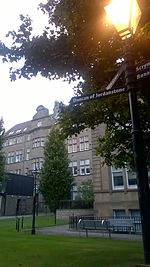 The main campus is within the West End of the City of Dundee. It has expanded greatly since the university gained independence, from just four converted buildings when the University College was founded in 1881 the university has grown to consist of over fifty at present. However, many buildings survive from Dundee's period as a university college and as a constituent college of St Andrews University. The earliest purpose-built facility on campus was the Carnelley Building which opened in 1883 as part of the new University College. A £10,000 donation from Miss Mary Ann Baxter provided for a chemistry laboratory situated in the building which was named for the University's first Professor of Chemistry, Thomas Carnelley.

The buildings at the heart of the university form the Geddes Quadrangle. These include the Carnegie, Harris and Peters Buildings which were constructed in 1909 as part of the new college of the University of St Andrews.The Geddes Quadrangle was named for Patrick Geddes, a pioneering thinker in the fields of sociology and urban planning and former Professor of Botany at Dundee, as a botanist Geddes had originally proposed a garden in the center of the quadrangle to be used for teaching purposes.The designer was Victorian architect Robert Rowand Anderson, the architect of buildings such as the Scottish National Portrait Gallery and Mount Stuart House.

Amid the expansion of education in post-war Britain, the University College, Dundee commissioned the construction of several new buildings to cope with the increasing numbers of students and academics arriving. The first of these was the Ewing Building which had started planning in 1950 and was officially opened in 1954. Named after Sir James Alfred Ewing, the University's first Professor of Engineering, the building currently houses postgraduate research facilities for the engineering and physics disciplines as well as the NERC Satellite Receiving Station.The Fulton Building gave the civil and mechanical engineering department a dedicated building, it was opened in 1964 and took its name from Angus Robertson Fulton, former principal of University College, Dundee (1939–1946).

The 1960s saw the further development of the Queen's College campus with some of the earliest multi-story towers in Scotland being built for both teaching and student accommodation. The Tower Building, opened in 1961 by Queen Elizabeth The Queen Mother, exemplified early Scottish modernist architecture; it stands 140 ft tall with ten storeys home to both academic and administrative departments of the university. The Tower was built on the site of two of the original four Georgian houses which had housed University College, Dundee (originally known as Whiteleys). Its construction was notable as it was the tallest structure built in Dundee since the Old Steeple in the medieval period. The building was extended in the later 1960s was resulted in the demolition of the remaining two original buildings.

Belmont Halls of Residence took inspiration from Danish design and aimed to provide modern, spacious quarters for students while keeping costs cheap; it was completed in 1963 on the site of Belmont Works, a former jute mill.

The 2000s brought extensive renovation to the university's central campus, with a number of new and upgraded buildings introduced around 2007 to celebrate the 40th anniversary of the university's independence. Large extensions have been placed on the Main Library and sports centre, and a number of new halls of residence (Heathfield, Belmont, West Park and Seabraes) have been gradually phased into operation.The Dalhousie building was erected during this period as dedicated teaching accommodation for the University, in part replacing space previously at the Gardyne Road campus of Northern College, which has now been taken up by Dundee College. Significant improvement works have taken place in old buildings such as the Old Technical Institute, Medical Sciences Institute and Old Medical School buildings.

The School of Nursing and Health Sciences has a campus on Forth Avenue, Kirkcaldy, Fife. This offers degrees in Nursing, Midwifery and other health related subjects. Placements are available at Kirkcaldy's Victoria Hospital.