Birmingham City University(abbrev.BCU) is a university inBirmingham, England. Initially established as theBirmingham College of Artwith roots dating back to 1843,it was designated as apolytechnicin 1971 and gained university status in 1992.

The university has three main campuses serving four faculties, and offers courses in art and design, business, thebuilt environment, computing, education, engineering, English, healthcare, law, the performing arts, social sciences, and technology. A £125million extension to itscampus in the city centre of Birmingham, part of theEastside developmentof a new technology and learning quarter, is opening in two stages, with the first phase having opened in 2013.

Throughout its history the university has been spread across a number of different sites in Birmingham.

Demolition of the Perry Barr campus began in 2018.

As of 2018, the university is at the following campuses: 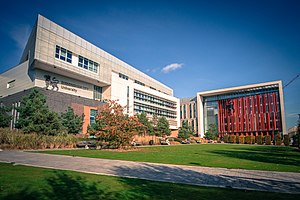 The Parkside & Curzon Building are part of the City Centre Campus

City Centre Campus, located is the home of Birmingham School of Acting and the Faculty of Computing, Engineering and the Built Environment inside Millennium Point. The Parkside Building, adjacent to Millennium Point and connected to it via a bridge, opened its doors in 2013, housing Birmingham School of Media and design courses from the Faculty of Arts, Design and Media. The Curzon Building houses the Faculty of Business, Law and Social Sciences and the School of English, as well as the library, Students' Union and other support services. Royal Birmingham Conservatoire, moved to the City Centre Campus in 2017.

Vittoria Street in the Birmingham Jewellery Quarter, home to Birmingham School of Jewellery.

City South Campus, on Westbourne Road in Edgbaston, home to both the university's health, education and life sciences courses and a moderate amount of student accommodation.

The university has completed a "flagship" extension to its campus in Birmingham City Centre, next to the existing facilities at Millennium Point. The City Centre Campus is a £150 million scheme, as part of Birmingham's Eastside development, with design and media students moving into Phase 1 of the development in 2013, from the former Gosta Green Campus and City North Campus, respectively. Business, English, law and social sciences followed when Phase 2 of the new building was completed in 2015.

As of September 2017, Birmingham City University invested approximately £220 million into campus infrastructure while moving its campus into the city centre. The university focused on building cutting-edge facilities for students and updating internal systems used for human resources and finance. The university purchased Oracle ERP Cloud and HCM Cloud to update its IT strategy and standardise employee-facing functions, which became crucial in the institution's efforts to modernise its IT infrastructure.

University House (formerly known as the New Technology Institute or NTI) is located close to the City Centre Campus and is home to a number of the University's professional service departments. The International Project Space (IPS) is an art gallery located at the Bournville Centre for Visual Arts.

Moor Lane is a venue for sports, business training and conferences near to City North Campus. Previously, a dedicated sports centre was located behind The Coppice, a student accommodation block next to the former City North Campus, and included tennis courts, bowls, football and rugby pitches, running track and a social club. The university announced a £7 million sports complex would be built on the site, formerly the Ansells Sports Club, with construction to start in mid-2008 for completion in 2009.The Doug Ellis Sports Centre, named after Doug Ellis, opened on 4 January 2010 and includes a fitness suite, workout classes, and a sports hall.Lawyers at Wragge & Co have advised Birmingham City University on the outsourcing of work for the sports centre to international service company Serco. Under a new 10-year agreement, the FTSE 100 company will run both the sports centre and the existing Pavilion sports facility in Perry Barr.

The Coppice and Oscott Gardens are residential halls of residence located adjacent to former City North Campus. The university also offers accommodation in a number of privately owned halls of residence, these include Jennens Court, My Student Village: Birmingham (formerly clv Birmingham) and Curzon Gateway in the city centre.There are also halls of residence at the City South Campus, primarily used by nursing students.