The University of Plymouth is a public university based predominantly in Plymouth, England where the main campus is located, but the university has campuses and affiliated colleges across South West England. With 21,645 students, it is the 38th largest in the United Kingdom by total number of students (including the Open University). It has 2,915 staff.

When university status was gained in 1992, the university was based in various locations. Under Vice-Chancellor Levinsky the university began a policy of centralising its campus activities in Plymouth.

The Exmouth campus – Rolle College – housed the Faculty of Education and relocated to the new Rolle Building in August 2008. The decision was unpopular with students and the town of Exmouth itself. There were several protest marches and a campaign to keep the campus open.

Completed developments include Portland Square, a library extension, refurbished and new laboratory and teaching facilities in many of the campus buildings, halls of residence near the Business School and a new £16 million Peninsula Medical School headquarters at Derriford, in the north of the city.A Marine Building has been constructed behind the Babbage Building to house civil engineering, coastal engineering and marine sciences.

An exception to the trend of centralising activities are the university's extensive activities in education for the health professions. In addition many of its students are taught at Further Education Colleges throughout Devon, Cornwall and Somerset, such as South Devon College. A building which opened in 2008 is shared between the Peninsula Medical School and the Faculty of Health and Human Sciences. 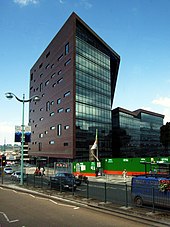 The Roland Levinsky Building, designed by architects Henning Larsen with Building Design Partnership, is clad with copper sheets in a seamed-cladding technique, is nine storeys high and has 13,000 square metres (140,000 sq ft) of floor space. The Faculty of Arts, previously based in Exmouth and Exeter moved here in August 2007. The building contains two large lecture theatres, the Jill Craigie Cinema, used by the film students to display their films and for showing of films to the public; three performance rehearsal studios; digital media suites; and a public art gallery which displays work by local artists groups, students and famous artists.